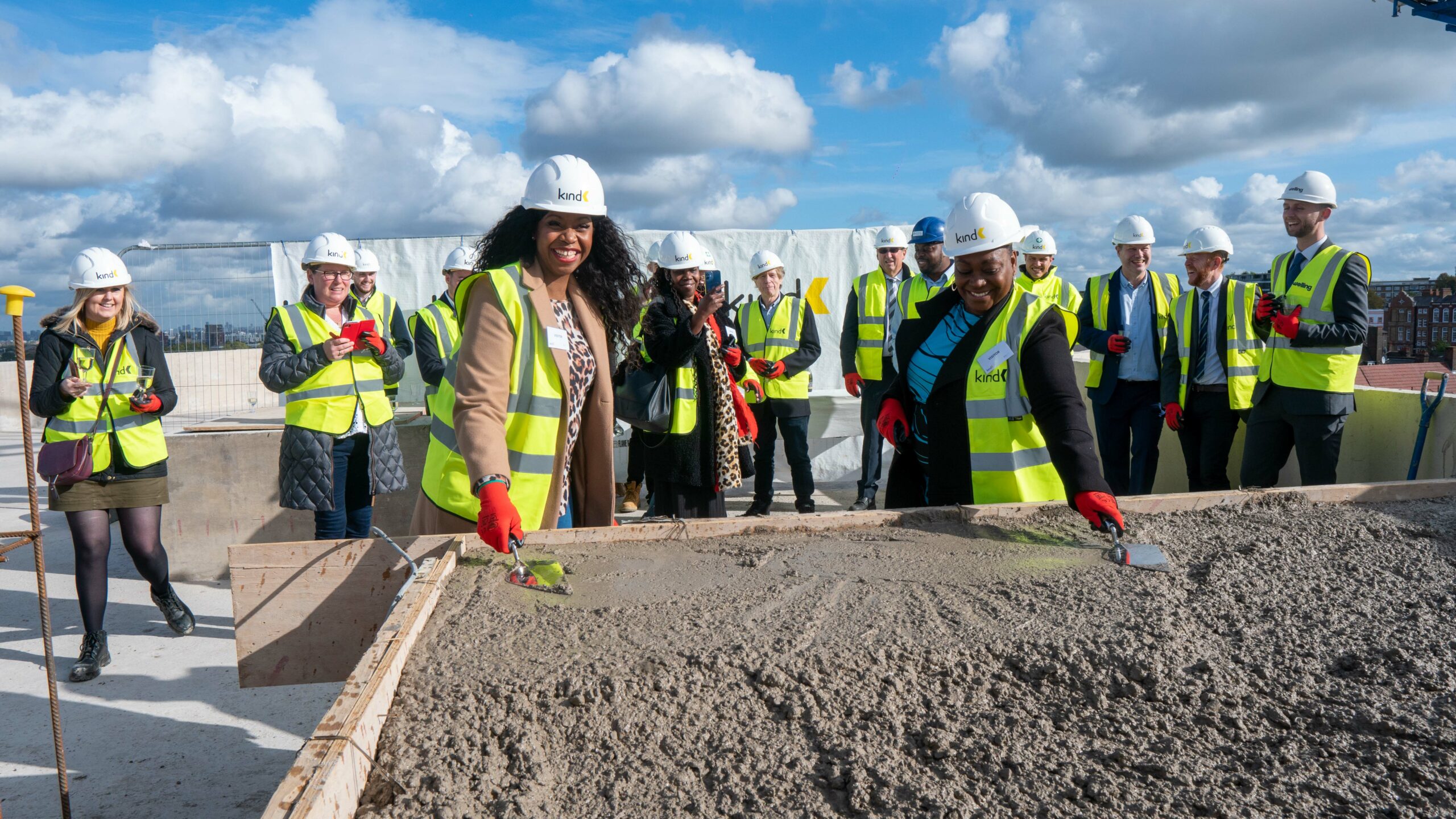 Summary:KeithShaw House will include 50 affordable homes, part of the massive Clapham Park regeneration scheme, which MTVH has been delivering since 2008

At a ceremony earlier today, it was announced that a newly completed housing block at the heart of the Clapham Park regeneration scheme will be named after Keith Shaw, who arrived in South London from the Caribbean in the 1950s and spearheaded quality, affordable housing for the community. He helped establish the housing association which would become MTVH (Metropolitan Thames Valley Housing) and was one of its longest-standing residents.

At today’s ‘topping out’ ceremony, which marked the completion of the building’s external structure, Shaw’s daughter Sharon Shaw was on hand to help Cllr Ed Davie of Lambeth Council (Thornton Ward), Guy Palmer (Director of Regeneration, MTVH) and Bill Bassenger (Joint Managing Director, Kind & Company) lay the final section of the main structure of what will eventually become KeithShaw House.

MTVH is one of the UK’s largest housing associations, providing affordable homes, and care and support services. MTVH is responsible for the overall Clapham Park regeneration scheme. Kind & Company is delivering the construction of KeithShaw House and also built one of the scheme’s earlier blocks at Forster Road.

It was decided to name the building after Keith Shaw following a call for local people to submit names of residents with local significance. Keith arrived in the UK in the 1950s to join his mother who had settled in Brixton. He helped Molly Huggins, wife of the Governor of Jamaica, who was troubled by the poor state of housing for the country’s new arrivals, to establish the Metropolitan Coloured People’s Housing Association – later to become Metropolitan (a forerunner of MTVH) – to provide quality, affordable accommodation for London’s Caribbean community. Keith was a resident of the housing association for more than 50 years until his death in 2018.

Similarly, KeithShaw House will stand on Donna Mews, named after Donna C Henry MBE. Donna headed a group of residents who drew the attention of Lambeth Council to the social, economic and housing problems of the Clapham Park estate in the late 1990s. She campaigned for the neighbourhood to receive New Deal for Communities status, setting in motion change that developed into the regeneration work that is ongoing today. She diligently chaired the Clapham Park Project for fifteen years until her death in 2020.

Sharon Shaw, daughter of Keith Shaw said: “It is wonderful to know that my dad’s name will live on in this way and that the housing association he was so influential in establishing is continuing to make such a positive impact on the local community. This new block will be a great tribute to his work and his commitment to ensuring that everyone has access to quality and comfortable housing. He would have been so thrilled to know that the people in the community which he was so proud to be a part of, will have a wonderful new home bearing his name.”

Geeta Nanda OBE, Chief Executive of MTVH said: “This is another important milestone as we continue to regenerate Clapham Park, by building new homes, improving the local environment and providing new opportunities for everyone in the area. As such, we are delighted to honour the memory of Keith Shaw, by naming this building after him.  Keith was a real pillar of the local community and an important figure in the history of MTVH. As we mark Black History Month, today’s ceremony is a timely reminder of the huge contribution that pioneers such as Keith and the entire Windrush generation have made to our society.”

Bill Bassenger, Joint Managing Director of Kind & Company said: “We are delighted to welcome everyone to this ‘topping out ceremony’, as we move into the next phase of delivery for this scheme.  It is lovely to hear the story behind the naming of this block, I am sure Keith would have been delighted and his family must be very proud of the legacy this building will bring – as a former long-term resident, and someone who clearly played an important role in the formation of this housing association, it is a great tribute.

“This is the second scheme we will be delivering within Clapham Park for our client, with our last project completing in 2017.  We were delighted to have been selected to return to the estate to contribute towards MTVH’s 15-year programme to provide quality new homes for its residents’’.

Cllr Ed Davie of Lambeth Council (Thornton Ward) said: “Lambeth Council is very pleased to be supporting this development and we are delighted that local social housing tenants currently living in older, poorer quality housing will soon be able to move into KeithShaw House and other high-quality accommodation. We are also working hard to ensure that local residents benefit from the jobs, training and apprenticeship opportunities that this development brings. Clapham Park regeneration is renewing and creating community facilities including a nursery, a children’s centre, schools, parks, shops and the Cube community centre.”

Scheduled for completion by October 2023, KeithShaw House will include 50 homes, comprising 41 apartments and nine houses for affordable rent. Residents of Keith Shaw House will be existing Clapham Park tenants, providing a significant upgrade in accommodation and quality of life.

On completion, Clapham Park, which spans 36 hectares and is nestled between three local centres, Clapham, Brixton and Streatham Hill, will have a total of over 4,000 homes, plus new community spaces and green areas for the benefit of the entire community.