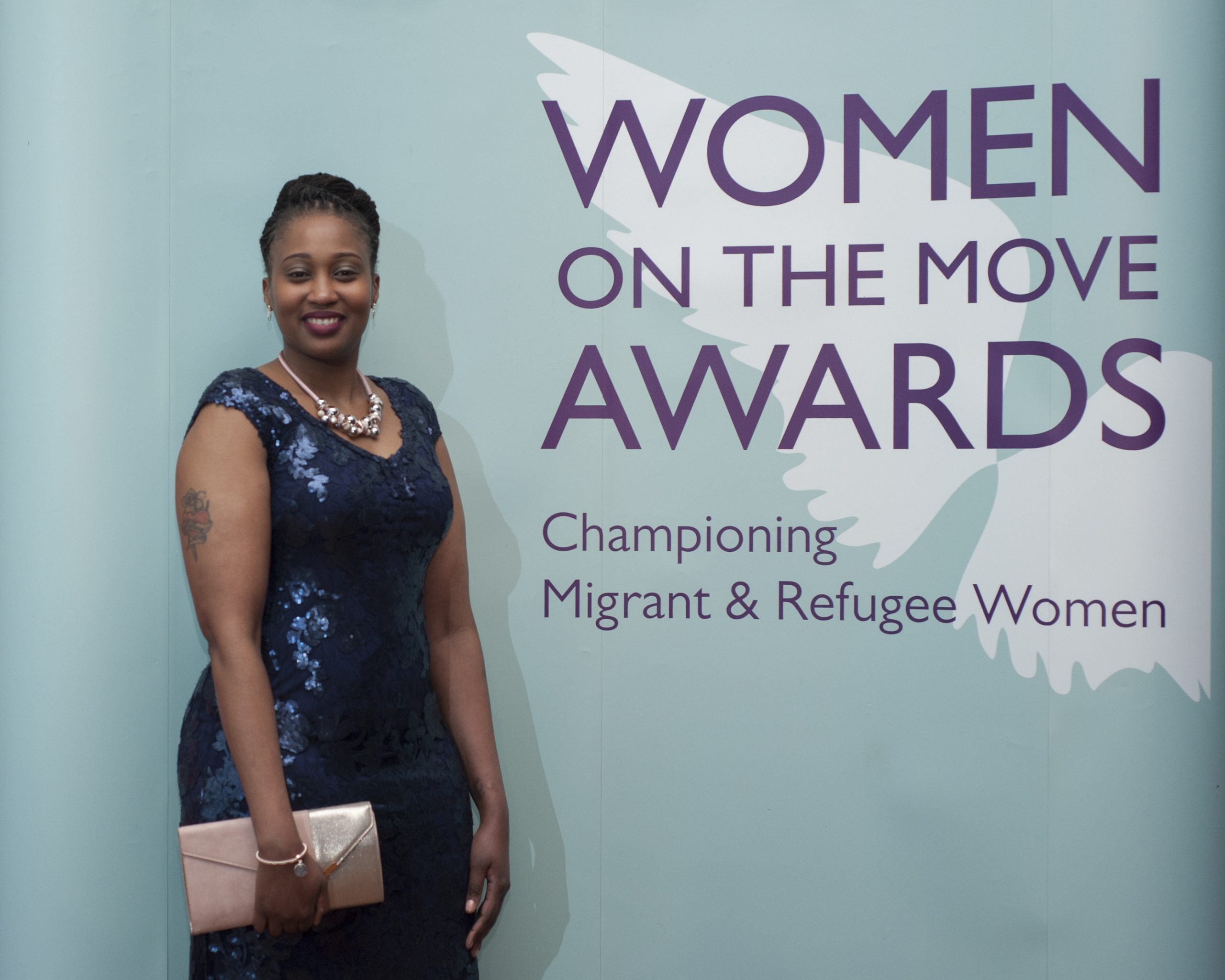 Summary:Former Women on the Move Awards winner Florence Kahuro talks to MTVH about her experience and the importance of bringing communities together.

Meet Florence, who was joint winner of the 2018 Woman of the Year Award, along with colleague Veeca Smith Uka. Based in Halifax, Florence has made it her mission to help vulnerable people in her community and has been involved in numerous campaigns to make a change for the better.

Florence recently spoke to MTVH and discussed her journey with the Women on the Move Awards and how she has brought her community together.

I am originally from Kenya but now live in Halifax with my seven-year-old daughter. A few years ago I set up an organisation, alongside Veeca Smith Uka, called Sisters United. We work to support vulnerable people in Halifax by helping asylum-seekers to settle into their new lives and supporting other people in the local community. We provide advice and a safe space, as well as support with practical tasks – everything from taking people to hospital, finding school uniforms for families who can’t afford them, providing food and clothes to homeless people, and supporting people who have suffered domestic abuse. One of the major parts of our work as been to fight for improved standards in the housing provided for people seeking asylum. Every week we help over 50 women from almost 20 different nationalities.

I got involved in the Women on the Move Awards when I was nominated for, and then won, the Award in 2018. Vee and I were celebrated via the “Woman of the Year” category for our join efforts with Sisters United to build bridges people and institutions in Halifax, create a supportive and informative network, and strengthen our community.

Winning the Women on the Move Awards has created a very good platform for me in so many areas of my life. It’s helped with my confidence and mental health, opened new opportunities, given me the drive do new things which benefit my community, and is propelling me forward in my career.

Since winning, Sisters United has gained more visibility, been able to make links with other organisations, conduct more campaigns, participate in training, apply for more funding, and deliver more services and activities. The group has grown and now we are helping more people than ever before. The impact we are having in Halifax is clear: in 2018 we won the community involvement award from Halifax council.

We are also contributing to nation-wide initiatives – we joined women from various different organisations to participate in big events such as the All Women Count women’s march on Parliament and the National Refugee Week Conference. I attended an anti-poverty and universal credit summit in Bradford, where I spoke about the struggles that asylum seekers and other vulnerable people experience. I was also invited to Holocaust Memorial Day, to remember the effects of discrimination, hatred and exclusion amongst different groups of people.

One of the things I’m most proud of is the campaign we launched against G4S, a private company which the Home Office contracted to provide housing for asylum seekers. Our campaign aimed to advocate for better standards in this accommodation. We approached the project by creating a survey to understand the experiences of people living in dirty, low quality, and unsafe housing.  The results that we got back really demonstrated the severity of the poor living conditions therefore, we contacted various organisations such as Migrants Organise to bring them on board and get their support. We also involved the local churches and the mosque and even got the backing of our local MP. We held many meetings and briefings to explain the problems caused by poor housing and also got in touch with a BBC journalist who filmed numerous properties exposing the shoddy conditions. In addition, we received coverage on Daily Politics and this really opened people’s eyes to the problem.

After that we sat down with different organisations from West Yorkshire and drafted a housing charter which we then presented to G4S. They didn’t take our recommendations on board, or even turn up to meetings, but fortunately the findings of our housing survey were used in Parliament, and eventually G4S lost the contract. This was a fantastic outcome!  It resulted in the contract being awarded to a different organisation which will hopefully mean that the housing provided now will be better, cleaner and safer. If this doesn’t happen, we will be back again to fight for the rights of people living in these homes!

Another project that I am proud of is the cycling group which I established. This has helped women in the community in so many ways – getting them out of the house, getting them active, providing them with practical skills, improving their confidence, improving their mental health, helping them to socialize and reducing their transport costs.

Back in 2018, I was going through a very difficult time in my life, but winning the awards really helped change this. It helped build my confidence, and showed me that I can face people, walk into any office, introduce myself and share my experiences and expertise. It’s shown me that what I have to say and contribute has value.

Initially it felt a little unreal to win, because I had never realised that I could be appreciated so much. I also didn’t expect to be appreciated for my work as I do it because I want to, not in order to win anything. Having said that, winning did feel great!

I think events like these are important because they appreciate, recognise and empower people. Not just the individual award-winner themselves as the impact is far bigger than just one person.

For example, people in my community recognise me now and are comfortable to approach me. They feel confident asking me for help and advice, and I feel confident giving it to them.

Additionally, the various initiatives I’ve been able to get involved in since the awards helped other people take steps to get involved in projects that benefit the whole community. For instance, I’ve played a part in the Lift the Ban campaign, which campaigns to allow asylum-seekers to work. We brought different organisations together to discuss the damaging effects of being denied from working, covering how this forces them into poverty and the mental and emotional stain it causes. We explained to people how they could get involved, sent petitions, and other ways to support the campaign. The turnout was fantastic – there was over 300 people, who are now doing things to help others in their community who are struggling.

Because we work with everyone in our community, whether they’re British or from abroad, we’ve been able to bring the community together. I really think the community has started to appreciate asylum-seekers more and understand that the typical, negative portrayals of refugees and migrants are not true. This is so important, and we have are so pleased to be able to achieve this sense of togetherness.

In addition, the financial contribution that we received via the Award to contribute to our work really made a difference in our community. For the first time, we were able to take our members and their children out of Halifax to visit the seaside.

Click here to watch a short film about the work of Florence and Sisters United.